Fashion Week, all about brand building

It’s always been a dream of mine to attend Fashion Week in New York City. Thanks to a local charity auction, it became a reality a few weeks ago. In April, Wheels of Success, a nonprofit in Tampa that provides automobiles for people in need, held their annual fundraiser. Like many charity events, they had a live auction offering some very cool items. The package I bid on and won was two tickets to go to a show at the 2014 Mercedes Benz Fashion Week in New York City. 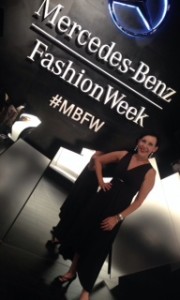 Fashion Week New York started in 1943 as way to distract from French fashion during World War II, because the fashion industry could not travel to Paris. It was also an opportunity to showcase American designers who at the time were in the shadow of the French Couture houses. Today, New York Fashion Week is the first of 138 Fashion Weeks around the world that kicks off the two main buying seasons, autumn/winter and spring/summer.

Fashion Week in the major markets like NYC, Paris, Milan, London and Berlin are mostly invitation-only events where design houses, fashion brands and their public relations firms invite store buyers, fashion journalists and celebrities to view the new styles, colors and looks that will set the trends for the coming season.

If you are not in the fashion industry, the media, or like me and had an opportunity to snag a ticket through a charity event, you can still attend. American Express Concierge service offers several events ranging from runway shows in their skybox, to private meet and greet events with designers. The costs range from $75-$350 a ticket. I attended two shows, Georgine through the charity package, and Malan Breton, that I purchased through American Express. Another option is to get a gig as a volunteer contact: mbfw_volunteers@cfda.com, or try interning for one of the sponsors, designers or a PR firm. 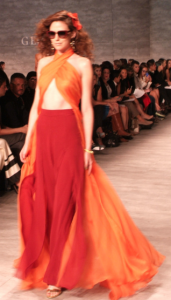 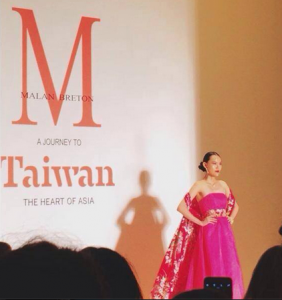 My experience at the Mercedes Benz Fashion Week was a blast. Beyond the runway productions, beautiful models and my sneak preview of next season’s fashions, I gained insight on how an industry like apparel is adapting to change and how non-fashion brands are now getting in on the spotlight of this international trend setting stage.

Since I was in the city for Fashion Week, my friends at Fox News asked me to come by the studio to provide some footage for their affiliate networks about my observations and what I learned about branding trends. Here’s some of what I said and some other interesting finds. 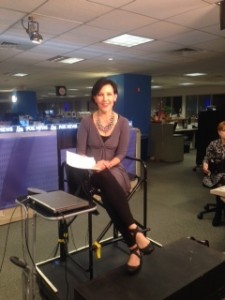 Fashion Week is a runway for all kinds of brands to take off!
The stage starts with 100,000+ trend and fashion influencers coming to New York City. They’ll add over $25 million to the city’s economy.

7 days of showcasing over 250 designers and savvy brands seeking a connection to the styling crowd will help: journalists pen their stories, trend setters decide what is cool and mass market retailers determine what to knock-off to stock their fast fashion stores.

The critics’ loves and hates, pics and pans direct what is pushed out to consumers and the scan of impact is so much greater than fashion, these style trends will be seen in décor, technology and even food.

The world of fashion influence has a new face.
It’s not limited to the big books of fashion like WWD or Vogue from years past. Today some of the runway’s front row seats were taken by social media tastemakers and bloggers with big fan bases.

You don’t have to be a design house to get in on the action at Fashion Week.
Zappo’s set up recharge stations across the street from Lincoln Center offering weary fashionistas and other industry folks a place to chill, relax and refuel. 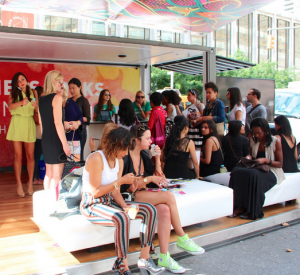 Swag, product sampling and placement were alive and well.
My American Express gift bag was full of cool things, my favorite being a commemorative swellbottle.com, the reusable drink container that looks fabulous too. If you’ve not seen these, check them out here. They offer an array of designs, finished in insolated bottles.

Technology and fashion continue to merge.
Samsung was one of this year’s Fashion Week sponsors, showcasing everything from their latest smartphone to their new wearable smart watch at the Samsung Galaxy Lounge. Open Ceremony launched their Intel-powered smart bracelet and other tech brands like Fitbit are partnering with fashion names like Tory Burch. Even Google techies are teaming up with fashion veteran Diane Von Furstenberg – and this is just to name a few. And if you are not that into accessories, just wear a well lit dress by London-based firm CuteCircuit who uses LED technology on its designs to display twinkling lights that react to the wearer’s movement and charge when plugged into a USB. They can also be programmed with customized text or feature designs chosen via the company’s app. 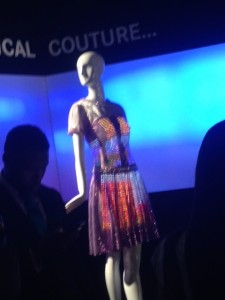 Had a great time in at Fashion Week and look forward to many more. So as you can see, branding is becoming more important than ever, even when you throw tech companies in the fashion world!

Karen Post is an entrepreneur, international branding authority, and author. Her books include: Brand Turnaround: How Brands Gone Bad Returned to Glory and the 7 Game Changers that Made the Difference (McGraw-Hill); and Brain Tattoos: Creating Unique Brands That Stick in Your Customers' Minds (AMACOM).

This Is A Custom Widget

This Sliding Bar can be switched on or off in theme options, and can take any widget you throw at it or even fill it with your custom HTML Code. Its perfect for grabbing the attention of your viewers. Choose between 1, 2, 3 or 4 columns, set the background color, widget divider color, activate transparency, a top border or fully disable it on desktop and mobile.

This Is A Custom Widget

This Sliding Bar can be switched on or off in theme options, and can take any widget you throw at it or even fill it with your custom HTML Code. Its perfect for grabbing the attention of your viewers. Choose between 1, 2, 3 or 4 columns, set the background color, widget divider color, activate transparency, a top border or fully disable it on desktop and mobile.